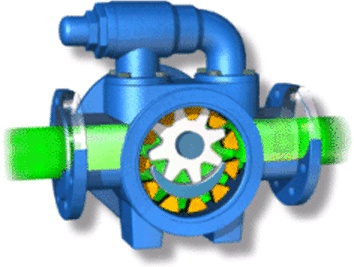 In stock
Contact supplier
Description
The internal gear pumping principle was invented by Jens Nielsen, one of the founders of Viking Pump. It uses two rotating gears which un-mesh at the suction side of the pump to create voids which allow atmospheric pressure to force fluid into the pump. The spaces between the gear teeth transport the fluid on either side of a crescent to the discharge side, and then the gears re-mesh to discharge the fluid. Viking's internal gear design has an outer drive gear (rotor- shown in orange) which turns the inner, driven gear (idler-shown in white).

Internal gear pumps in other languages